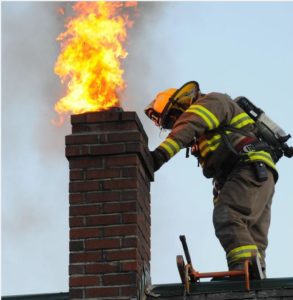 You may think that a fire in a fireplace goes up and out, but it often clings to your chimney and builds up residue on the flue – the chimney’s interior shaft designed to vent smoke and fumes to the exterior of the building. Such residue, known as creosote – a thick, oily brown, and flammable tar that coats the flue when the fireplace is used – is responsible for the most intense and destructive fires that occur in homes.

More than one-third of Americans use fireplaces, wood stoves and other fuel-fired appliances as primary heat sources in their homes. But many people are unaware of fire risks when heating with wood and solid fuels.

According to the US Fire Administration (USFA), an entity of the Department of Homeland Security’s Federal Emergency Management Agency (FEMA), heating fires account for 36% of residential home fires in rural areas every year. Such fires often are due to creosote build-up in chimneys and stovepipes. The USFA recommends that all home heating systems require regular maintenance to function safely and efficiently.

How Often Should A Chimney Be Cleaned?

We know what you’re thinking – it all depends on how much you use the chimney. Right? Not Exactly! 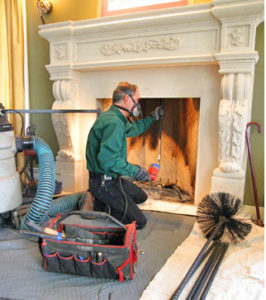 “Chimneys, fireplaces, and vents shall be inspected at least once a year for soundness, freedom from deposits, and correct clearances. Cleaning, maintenance, and repairs shall be done if necessary,” according to the National Fire Protection Association Standard 211. The standard accounts for the fact that even if you don’t use your chimney very much, animals may build nests in the flue or there may be deterioration that could make the chimney unsafe to use.

The Chimney Safety Institute of America recommends that open masonry fireplaces should be cleaned at levels of 1/4″ soot buildup, and sooner if there is any glaze visible in the system. Factory-built fireplaces should be cleaned when any “appreciable buildup” occurs – this is considered to be enough fuel buildup to cause a chimney fire capable of damaging the chimney or spreading to the home.

If your chimney also needs cleaning, you will probably spend between $100 and $300, but keep in mind that the cost of major chimney repairs, resulting from neglect, can cost thousands of dollars or more.

Why is There Smoke in the Downstairs Fireplace When I Build a Fire Upstairs?

This phenomenon, better known as “backdrafting,” is a symptom of overall pressure problems in the house that can cause smoke to be drawn down through the chimney and into the living space as opposed to being expelled to the exterior when the fireplace is in use.

This issue has become quite a common problem in modern, air-tight houses where weather-proofing has sealed up the usual air infiltration routes. The fireplace in use exhausts household air until a negative pressure situation exists. If the house is fairly tight, the simplest route for makeup air to enter the structure is often the unused fireplace chimney. As air is drawn down this unused flue, it picks up smoke that is exiting nearby from the fireplace in use and delivers the smoke to the living area.

The best solution is to provide makeup air to the house so the negative pressure problem no longer exists, thus eliminating not only the smoke problem, but also the potential for carbon monoxide to be drawn back down the furnace chimney. A secondary solution is to install a top mount damper on the fireplace that is used the least.

Should I Have My Gas Chimney Checked?

Of course you should check a gas chimney! Although gas is generally a clean burning fuel, the chimney can become nonfunctional from bird nests or other debris blocking the flue. Modern furnaces are often vented into chimney flues and can also cause many problems with the average flues intended to vent the older generation of furnaces.

Why Do I Need Chimney Liners? 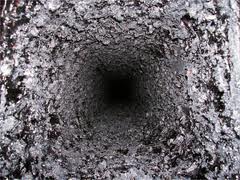 For safety – a flue lining in a masonry chimney is “a clay, ceramic, or metal conduit installed inside of a chimney, intended to contain the combustion products, direct them to the outside atmosphere, and protect the chimney walls from heat and corrosion.” Although building codes vary by state or locality, the installation of flue lining has been recommended since the early part of this century, and indeed most fire codes now mandate liners.

By itself, creosote is a corrosive agent. When paired with expansion and contraction related to extreme changes in temperature caused by hot fires on the inside of the flue and cold temperatures on the exterior, cracks and fissures occur in the brick and mortar structure. These cracks and fissures can be a conduit for an invisible and deadly gas, know as carbon monoxide, to migrate into the building’s living space.

In the 1940’s and again in the 1980’s, masonry chimneys were tested by the National Bureau of Standards for durability due to concerns about their performance and safety. Tests revealed that unlined chimneys were so unsafe that researchers characterized building a chimney without a liner as “little less than criminal.” (Chimney Safety Institute of America) .

Do Most Fires Start Inside The Chimney?

Keep the Fire Glowing and Safe