Winter is drawing near, and with the cold comes our need for heat.  Fire has been used for heating, whether for camp, cave, castle, hut or home. Thankfully, fire has come a long way from the traditional camp fire. When we use the word fire, particularly in the context of home heating, we’re referring to the various methods used to heat the modern home.

In this edition, we discuss the most popular home heating system – forced air central heating, which generates heat and “forces” warm air via ductwork to various points in a house.

Maybe Not Medieval But Definitely Not Modern

Forced air heating may be the most popular central heating system in North America, but it is not new!  This form of heating has been around since the 1930’s.

There have been innovations over the last 80 years, but the basic concept remains – air is heated and “forced” through a system of ducts and vents into different rooms of a home.

The heating source is the variable part of the system. Even though there are lots of different ways to generate heat, the distribution method and the distribution network generally are similar. Theoretically, you could build a bonfire in your basement to generate and push heat to the rest of your house using forced air, but thankfully there are better ways to harness a heating source in a controlled manner.

The most common heating system is the gas furnace, which has pipes that deliver gas to an air handler. Gas is attached to a regulator that turns gas flow on when your thermostat gives the signal. 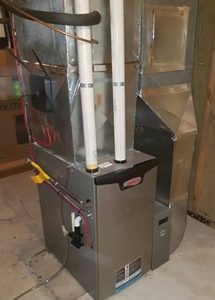 Furnaces that burn natural or propane gas have tubes with small holes which are ignited when heat is required; these tubes are similar to tubes in a gas grill. Burner flames are surrounded by metal which is heated and the heat exchanger transfers heat from the flames to the air. In high efficiency units, there is a secondary heat exchanger which captures heat from the primary heat exchanger and circulates warmer air.

Regardless of piping type, our inspectors also recommend periodically checking your gas lines for leaks from the gas meter to the gas regulator at the air handler. The easiest method to test for leaks is good ole’ fashioned soap n’ water. Pour or spray soapy water on connections. If there are bubbles– there’s a leak. Gas leaks are very serious – call the gas company or a plumber immediately.

Regardless of gas or oil, byproducts of burning fuels need to be expelled outside the home. One byproduct is carbon monoxide (CO), which can be dangerous and deadly if not properly expelled from the home.

When exhausts cool, they produce water that contains corrosive acids; therefore, a CO exhaust system must be sloped upward and properly sized to ensure that exhaust doesn’t condense. Normally, small drops of water and acids are diluted above where exhaust exits the flue but if the exhaust is allowed to condense in the flue, it can chomp on the metal and allow exhaust to enter the home. Therefore, if there is rust, especially at the joints or elbows of the furnace exhaust, our inspectors recommend that you retain a contactor to make repairs and determine if the flue is properly sized for the furnace. An exhaust system also needs to be sized properly to allow draft to penetrate exterior air pressure, especially in colder climates.

A hydro air system is a combo hot air and hot water system. A central hot water boiler (gas or oil) generates heat and pumps water through small diameter tubing to an air handler unit which contains a hot water coil, an air conditioning coil, and a blower. As hot water heats the coils, a blower passes air over the coils and distributes the air via the ductwork.

Hydro air systems generally are smaller and more efficient and because there can be multiple air handlers which can be placed practically anywhere, installation and zoning can be very specific and customized to each house. However, the air isn’t as warm and there is heat loss as water runs from the water heating source to the air handler.

Heat pumps are common in moderately warm areas. Heat pumps capture heat from the exterior and transfer it to the interior. Captured heat is distributed through copper coils in an air handler and air is blown over the coils to transfer the heat to the rest of the home.

When it is too cold outside to capture enough heat to keep the house warm, heat pumps sputter, raise the white flag, and ask the electric grid for help. For those of us with heat pumps and electric backup, we cringe on cold, blustery days when the thermostat LCD kindly notes that the heat pump is on “emergency heat” i.e., we’re paying out the wazoo!

Electric furnaces are common in warmer climates (e.g., southern FL) where heat is required infrequently (because operating electric furnaces is so expensive). However, they’re low maintenance and because they are not used on a long-term regular basis, the systems generally last longer than other heating systems.

Creating fire and identifying your heat source is a very good place to begin if you’re planning a central heating system. However, the magic of “forced air” systems is in the distribution method.

(Historical note: Older central heating systems used gravity, like fireplaces, so it was warm near the heat source and cold further away. “Forced Air” was used as a selling point to indicate even distribution.)

Regardless of heat source, distribution for all air furnaces is similar. We’ll review the heart of the distribution network – the air handler. 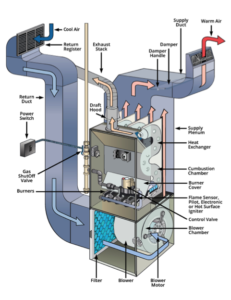 The return air component is normally where the air filter is located. Just past the return air connection and the filter is the blower motor; the motor should be sized to deliver air with adequate velocity to the furthest point in the house. The blower motor determines not only the outgoing heat through the vents, but also how much air gets sucked back into the return air vent on the other side of the room. The blower motor, along with the ductwork layout, is integral in circulating the air sufficiently to have even heating and not create hot and cold spots in the home.

Now you need a way to get the heat from Point A (the heater/blower) to Point B (that frigid room over your garage). That’s where ductwork comes in – you may have noticed shiny metal tubes which look like fragile aluminum foil. It’s not really aluminum foil, it’s very thin sheet metal wrapped around plastic ribs (or very thin plastic wrapped around metal ribs). There’s lots of different types of ductwork, including asbestos panels, fiberboard and wall chases, wood, and sheetrock. If air can pass through it, it can be used as ductwork.

The ductwork may appear to be a relatively basic part of the entire system because the ducts just “sit there.” Don’t be fooled – the design and installation of ductwork are incredibly important to the efficient heating (and cooling) of a house.

The problem with ductwork is that it generally insulates as about as well as aluminum foil, i.e., not well. Warm air bleeds away from the ductwork as the warm air travels from Point A to Points B, C, X, Y and Z – unless ductwork is insulated properly, heat will dissipate into the cold night.

As a general rule, if you can insulate ductwork, it works much better. At the very least, for the spaces in which ductwork is visible – attics, crawlspaces, basement – make sure your insulation is appropriate because even if you’re not (yet) green, why pay good money to let your heat disappear?

We’ve conducted millions of inspections (yes, millions!) and the most common issue we discover during our inspections is ductwork that is disconnected or damaged. If ductwork is in the attic, please do not store items on top of it and do not step on the ductwork.

In crawlspaces and basements, check to make sure that ductwork is connected, especially where the duct meets the vent. Because the floor moves with varying humidity and climate conditions through the year, and because people step on floor vents, the duct-vent boot connection also a common inspection problem.

Over a couple of years, your ductwork collect the same types of dust, hair, pet fur and allergens that fall on your carpet or floors. Although the air filter will capture some of this, some will settle into the ductwork. Ask a professional to clean your ducts periodically and certainly after any big home improvement project.