Did you know that some soils act like a sponge? The more water certain types of soils absorb, the more those soils increase in volume (size). There are many terms that refer to these types of soil: expansive
soils, expandable soils, expandable clay, shrink-swell soils (say that three times fast!).

Whatever name is applied, expansive soils are ubiquitous across North America and cause billions of dollars in damage annually. The American Society of Civil Engineers (ASCE) estimates that half of all homes in the US are built on expansive soils, and half of those homes will experience some level of expansive soil damage. The ASCE also claims that expansive soils account for more home-related damage each year than floods, tornadoes, and hurricanes combined!

Expansive soils cause enormous amounts of damage, but surprisingly most people have never heard of the phenomenon. In many cases, damage from expansive soils is attributed to poor construction practices or a misconception that all buildings experience some type of “settlement” as they age.

What are Expansive Soils?

Expansive soils contain minerals that are capable of absorbing water. When the minerals absorb water, the soil increases in volume; expansion of 10% is not uncommon. Changes in the soil’s volume exert substantial force on a building’s structure and can cause significant damage. 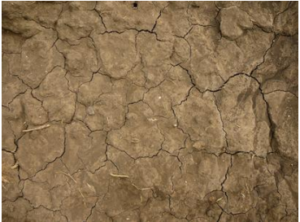 “Expansive” also is somewhat of a misnomer because potential problems don’t just occur when the soil expands from water absorption – when expansive soils become too dry, they also contract. And as soil shrinks from around a foundation, the structure settles, footings drop, and framing shifts. The evidence of settlement is visible via cracks in drywall and concrete, in doors and windows that aren’t level, and in damage and separations that occur at exterior siding.

Homes with rigid, masonry siding, such as brick and stucco, show evidence of settlement more readily than homes with more forgiving finishes such as vinyl and wood lap, which are more likely to flex with the soil’s movement.

Unfortunately, “expansive” can often lead directly to “expensive.” The magnitude of damages to structures can be extensive, impair the usefulness of the structure, and detract aesthetically from the home. Maintenance and repair requirements can be exhausting emotionally and financially and, in some extreme cases, expenses can grossly exceed the original cost of the foundation.

Lateral forces exerted by expanding soils can lead to the inward buckling of basement walls, a primary reason many homes in areas with prevalent expansive soils are built with slab-on-grade foundations without basements or crawl spaces.

Structural damage from expansive soils often can be minimized or avoided altogether by minimizing fluctuations in soil water content around the foundation:

What Actions Should You Take?

If cracks in the interior or exterior of the home are discovered during a property assessment, consider the following actions: