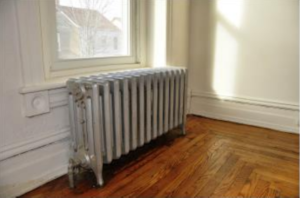 What’s so important about heat and water? Well, other than the ability to produce relaxing bubble baths or saunas on a crisp autumn day, heat and water comprise a fantastic (and essential) combo for hydronic central heating systems. Hydronic is a word that refers to a very simple concept – heating using heated water.

The Historicity of Hydronics

Like central forced air heating systems, hydronic heating systems have been around forever. Well, at least since mankind was hatched. According to archaeologists, there is evidence of “baked floors” in current day Korea and Manchu from as far back as 5000 BC. Greeks and Romans also used heated surfaces (floors and walls). More “recently,” the French used heated flues in floors and walls in greenhouses in the 1600s and our own American original, Ben Franklin, studied the French and Asian cultures to develop his famous stove. In the first part of the 1900s, noted architect Frank Lloyd Wright dabbled in various forms of radiant heating, developing the Herbert Jacobs house, the first Usonian house with radiant floor heating. 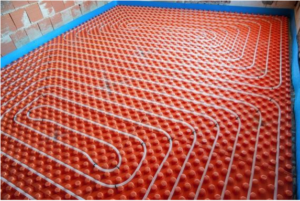 Although copper and steel piping helped adoption of hydronic heating, the innovation of plastics and plastic tubing in the second half of the 20th century transformed radiant heating. Hydronic heating has been widely adopted in Europe, Asia and Nordic countries. Alas, hydronic heating is installed in less than 10% of total residential households in the US, although many pundits expect adoption to increase because hydronic heating is marketed as having higher energy efficiency than forced air heating.

Hydronic heating is a central heating system which uses pipes to run hot liquid (usually water) beneath floors, along base board or wall heaters, or via radiators to heat your home. Hydronic systems generally are comprised of four elements:

Water generally is the heating medium but there could be another liquid (e.g., antifreeze mix). Hydronic heating generally uses radiant heat transfer vs. convection, which occurs when fluids or gases circulate from one area to another, e.g., forced air heating, which pushes air through ducts and vents.

Essentially, a boiler is just a big pot of hot water heated with whatever heating source you prefer (e.g., oil, gas, wood). 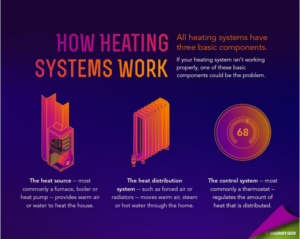 Boilers generally are produced from cast iron, but other metals, such as steel, are used depending on the configuration of the heat exchanger system. Hydronic boilers heat water to roughly 180F. Heated water is moved by an electrical circulation pump to rooms within the heating zone and then returned to the boiler for reheating and redistribution according to the demands of the thermostat.

Hydronic systems generally use radiators (convectors) to transfer heat into the home’s living spaces. The hydronic water boiler system is a loop – water starts at, and returns to, the boiler. Various radiators are aligned in series – radiators closest to the boiler receive the hottest water so the system includes controls to achieve even heat flow. Radiators often have several adjustments that allow a homeowner to customize how radiators distribute the heat from the boiler.

Steam boilers heat water to 212F (that’s why they’re called “boil-ers”). Steam boilers are placed at the lowest heated level in the home. Steam is circulated by convection, i.e., steam expands and propels itself upward, similar to steam coming out of a boiling tea pot. Steam is directed though insulated pipes to radiators in the rooms above the steam boiler; radiators are less insulated and allow heat to dissipate and radiate. Steam condenses, converts back to water and flows back down to the boiler for reheating. The simplicity of a steam boiler system is stunning.

Steam systems are common in older regions of the US and many are still in service. Because steam systems have few moving parts and are simply designed, they can last decades; it’s not uncommon for a cast iron steam boiler to be functional for 50+ years.

A boiler is an intriguing combo of plumbing and heating components. Where there’s heat, water and boiling water, there’s inevitably potential for danger to property, limb and life. During the course of our 3 million (yes, million) residential inspections, we’ve identified and characterized some painful issues related to boiler heating systems. 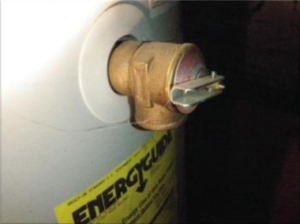 Sending By-products Up the Flue

Along with scalding water, another common danger related to boilers is the control of flue gases produced by the burning of fuel to heat the water. When natural gas or oil is burned, the resulting gas by-products need to be expelled from the home. Our inspectors examine draft hoods, weighted draft flaps, or inducer fans for damage or deterioration. For oil-burning units, by-products are more corrosive; when the mix of oil is not properly maintained, there generally is a lot of soot, which indicates that the unit needs to be tuned. Our inspectors also examine the heat exchanger or firebox for oil burners; there should be no excessive rust or deterioration. Oil burners or spray nozzles should be clean with no excessive rust.

Water leaks are among the biggest concern for any hydronic radiant system. Some water leaks occur because of age but most water leaks are the result of poor plumbing connections; finding water leaks, particularly dribbles, can be akin to finding a needle in the water  haystack. During home improvement projects, water leaks can occur if flooring installers accidentally drive a nail through a radiant tube, resulting in a watery mess. Naturally, our inspectors always carefully review all visible connections and fittings for signs of water leaks. 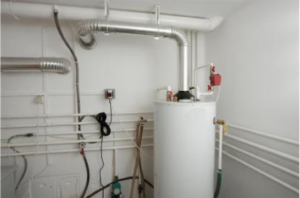 As with forced heat central air systems, insulation can be good or not-so-good. For bottom level flooring, insulation must be installed below the slab to prevent heat from radiating in the wrong direction. Newer hydronic systems allow for radiant heating on second floors, as well as above basements and crawl spaces; therefore, proper insulation is required to keep heated areas separated and heat reflectors are required to direct warmth to the intended places. It is also not uncommon for older boiler systems to have asbestos insulation on the boiler water lines or as parts of the boiler units. Our inspectors examine such materials and comment on their condition or the possible existence of the asbestos-containing materials.

The Happiness (or Not) of Hydronics

Hydronic systems represent a smaller percentage of installed central heating systems in the US, which may be baffling given the claimed benefits: precise zone control, the comfort of warm floors, and the comfort of humidity and the peaceful quiet (no fans pushing air). Experts claim that hydronic heating can produce similar levels of heat as traditional systems at 20% to 40% of the operating cost.

However, there’s always the flipside to a coin. One of the major reasons hydronic systems are not ubiquitous are installation and maintenance costs – it’s expensive to install all of the required piping and boilers are expensive to install and expensive to maintain. If there’s a water leak, it can be a nightmare identifying the source of the leak, particularly in older homes with older pipes. It’s an even bigger nightmare if a pipe breaks and, unless the system is properly mixed with anti-freeze, pipes can freeze if electricity dies. Last but not least, costs of maintenance and upkeep for hydronic systems generally are much higher than costs for maintenance of traditional systems.